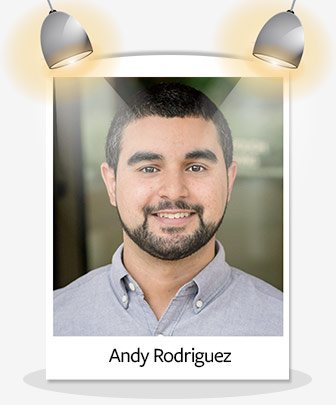 A Brooklyn native and graduate of SUNY Old Westbury, Andy Rodriguez is one of InTouchMD’s star web developers. Since becoming a part of the InTouchMD family three years ago, Andy’s out-of-the-box way of thinking and superior software development skills (something he has been mastering since middle school) have played an integral role in helping to take our Pulse Marketing Automation platform to the next level. This should be no surprise though, because hard work is hard-coded in Andy’s DNA. The child of two hardworking parents, Andy has often been heard saying, “Sometimes when I’m feeling a little lazy, I remember everything they’ve accomplished and I snap out of it.” We can confidently say that without Andy on our team, Pulse wouldn’t be the tremendous success that it is today.

Andy is a no-brainer for this month’s Employee Spotlight. He is driven by an insatiable thirst for knowledge, so trying new things is something that is always foremost on his mind. It’s a trait that affects everything from how he works to where he decides to have lunch. With Andy, it’s all about “what’s next.” In fact, if Andy won $10 million in the lottery, after he shared some with family and friends, it’s his dream to venture off on an around-the-world excursion of a lifetime so he can learn something new every day. But, should he be lucky enough to win the lottery, don’t expect him to stop developing any time soon. He loves it so much, it’s more passion than job. And, at InTouchMD, we couldn’t be happier that he chose to share his talents with us. Thank you, Andy!